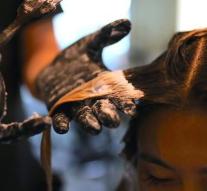 london - Women should not paint their hair more than five times a year. Do they do that more often than they run 'fourteen percent more likely breast cancer'.

That advises Professor and surgeon Kefah Mokbel of the Princess Grace Hospital in London. In the Times he says that additional research is needed. Until then, Mokbel advises more natural color rinses like Henna.

Also from earlier Finnish research, women who regularly dye their hair are at greater risk. It is unclear whether the paint is the cause. 'It may be that those women also use more cosmetics.' says Sanna Heikkinen of the Cancer Institute in Finland against the newspaper.

Kefah Mokbel, chief surgeon of the London Breast Institute, says it's worrying to find that the hair dyeing industry recommends dyeing your hair every four to six weeks.

A spokesman for paint suppliers says in the Times to comply with all strict health rules.