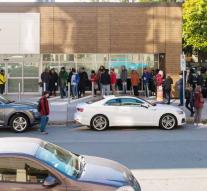 ottawa - In Canada, cannabis was sold for the first time legally. Canadians stood in line to buy the soft drug, media reports in the North American country.

Canada is the second country after Uruguay to legalize the recreational use of cannabis nationwide. The Canadian government also wants to make it possible to withdraw convictions from some people who have previously been prosecuted for possession of the drug, the newspaper The Globe and Mail reports. They will soon be able to apply for amnesty under conditions.

Interested parties could first go to the far east of the country, because the clock there was the first midnight. Some people waited hours in the eastern city of St. John's. Ian Power, who was at the front of a store, told CBC broadcaster that he came early to write history. 'It was my dream to be the first person in Canada to legally buy one gram of cannabis,' Power beamed.