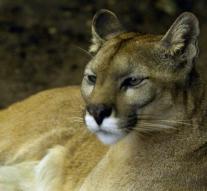 calgary - A Canadian man has heroically attacked by a cougar on his dog repulsed. He punched the beast in his face, which the cougar let go of the dog. That said the Royal Canadian Mounted Police (RCMP) Wednesday.

The man was on his way from his hometown of Red Deer to Grand Prairie, a journey of 600 kilometers. During a break, he let his dog loose. Moments later he heard his husky howl in pain and he saw the cougar had jumped on the dog. ' I could not immediately see what it was, ran right away and hit what I thought was his head. When the beast shrank until I saw that it was a cougar, 'said the startled man.

He kept the cougar at bay while he spent his husky wounded to safety. The police arrived ten minutes later. Following consultations with specialists, the police decided to shoot the cougar to prevent a recurrence of the attack on another dog or human.