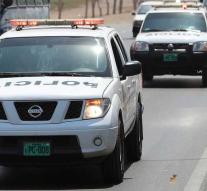 pucallpa - A 41-year-old Canadian was lynched in an Indian village in the east of Peru after the murder of a local medicine woman, Olivia Arévalo. The 81-year-old woman was assassinated last Thursday with a firearm in the town of Victoria Grande.

At the weekend villagers turned against the Canadian Sebastian Woodroffe who lived in the area and was reportedly a customer of the 'natural healer'. A Peruvian minister had let slip that a foreigner was suspected of involvement in the murder.

The police found the body of the Canadian in a grave near the medicine woman's house. She is now looking for the perpetrators of the lynching party. That does not have to be a difficult job, because the lynching was filmed by bystanders and distributed by Peruvian media.