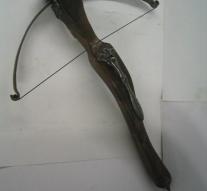 toronto - A 35-year-old Canadian is Friday charged in connection with a triple murder with a crossbow. Which announced the police of Toronto.

Two men and a woman were found Thursday in a garage in the east of Toronto, Canada. One of them had still been able to call the emergency number, but then died. The suspect was wounded. What exactly happened is still unclear.