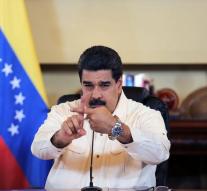 ottawa - Canada takes economic measures against forty powerful Venezuelans, including President Nicolás Maduro and his right-hand Tareck El Aissami, to punish them for 'anti-democratic behavior.' This was announced by the Foreign Minister Chrystia Freeland on Friday.

'Canada can not keep calm while the Venezuelan government robs the people of its fundamental democratic rights. '

The Canadian government follows the example of the Americans who have already found sanctions against Maduro and his vassals. Freeland said that their funds will be frozen and Canadians can not do business with them anymore. 'It is a reaction to the ever-increasing slipping of dictatorship. '