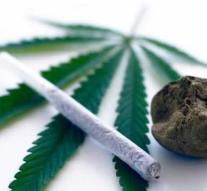 ottawa - In Canada, the Senate voted a large majority on Tuesday night to legalize the recreational use of marijuana. From September, Canadians can legally buy and use marijuana.

The law specifies exactly how drugs can be grown, distributed and sold. There are special weed stores in most states. In some states it is allowed to be blown on the street, in others it is not. The age also varies per state.

Canada is the first country in the G7 to legalize marijuana. In neighboring America there are a few states such as Nevada where cannabis is freely available.