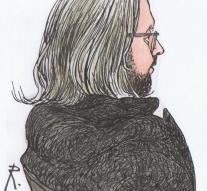 amsterdam - Can Aydin C., who is suspected of involvement in the death of Canadian teen Amanda Todd, be extradited to Canada? That is what the court in Amsterdam late Tuesday itself out.

The wish to prosecute C. authorities in the North American country for extortion, luring children over the Internet, threat or stalking and possession of child pornography with the aim to distribute. The 38-year-old suspect in the Netherlands is also open for assault and extortion of another 39 girls via webcam. Canada will however try him separately for the case Todd.

If the delivery room of the court agree to the request, C. leaving time being not from his Dutch cell. His trial in our country that comes to meeting expected until early next year, first follow.


The court moreover take a technical decision which examines compliance with all conditions. Ultimately decides Minister Ard van der Steur of Security and Justice definitively on the extradition.