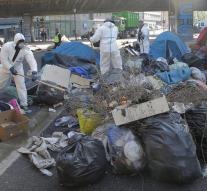 paris - The French police evacuated an illegal tent camp in northern Paris on Tuesday. The newspaper Le Parisien reported that a total of 1,600 migrants were evacuated.

The migrants lived in dire conditions at the illegal camp in Port de La Chapelle without proper sanitation. Most migrants in the camp were Afghans and Africans. The authorities have promised migrants elsewhere during the evacuation shelter.

Before the evacuation, 350 police officers and around hundreds of civil servants and collaborators were assisted.