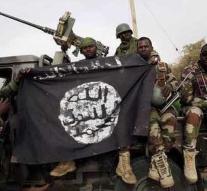 yaounde - The Cameroon authorities are investigating a video on the internet that shows that men in military uniform are shooting two women and two children. The victims would be suspected of membership of the Islamist terror group Boko Haram.

The video, of moderate quality shared more than 90,000 times on Twitter, shows two women with babies. On the video you can hear a man calling to the women: 'you are bra, you are going to die. 'BH stands for the Islamist terrorist movement Boko Haram.

The women are blindfolded and are told that they have to sit next to their children. Two men step back later, load their guns and shoot a number of bullets.

It is not known where and when the video was made. A spokesperson for the Cameroonian government says that it is in any case 'not about soldiers from the Cameroon army. '