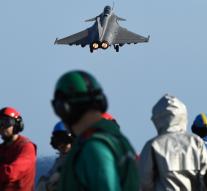 london - British Prime Minister David Cameron wants his country will take part in the bombing of Islamic state in Syria. Britain is " not outsource its security to other countries," the prime minister Thursday.

" That is why I believe that we make the decision to take the British air strikes on expanding ISIS to Syria, as an integral part of our overall strategy to suppress and the threat which emanates from it to reduce ", he writes in answer to questions by the foreign Affairs Committee of the British Parliament.