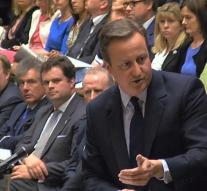 - It is of the utmost importance that holds together the United Kingdom. British Prime Minister David Cameron stressed this in the first parliamentary question time since the referendum last Thursday on the membership of the European Union.

The northern parts of the country, Scotland and Northern Ireland, voted convincingly for membership, while the advocates of leaving the EU (brexit) especially in England, outside London, were to be found.

Scotland's First Minister Nicola Sturgeon Wednesday in Brussels to emphasize that she wants to stay with the EU. She received among others by the President of the European Commission, Jean-Claude Juncker. Sturgeon expects the Scots prefer without the British then proceed without the EU.