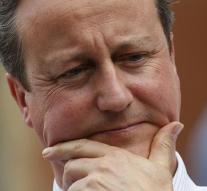 'I do not think I'm the designated leader to bring this country to a new destination,' said Cameron. He will continue to work in the coming weeks to steer everything in the right jobs. The decision comes after a majority of Britons opted for a Brexit.

72 percent of British voters gave his vote. Of these, 52 percent voted for an EU goodbye. The result comes as a surprise. According to most pollsters were going to win the favor of EU membership narrowly.