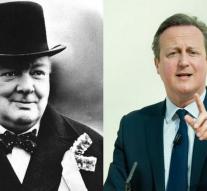 london - British Prime Minister David Cameron on Monday his illustrious predecessor Sir Winston Churchill cited in his efforts to keep Britain in the European Union.,, Isolationism has never worked for this country, 'Churchill said, and it expresses exactly the aim of Cameron.

On June 23, the British speak in a referendum on a possible exit from the EU, the Brexit.

Cameron considers leaving the EU as an explicit risk to the security of the country. He pointed to the more aggressive Russia and the terrorist organization Islamic State. Such enemies can you resist better within an EU context only. Britain wants information about terrorist attacks as recently continue to receive in Brussels, the country should remain in the EU, was his message.

The referendum decides on our place in the world, about how we keep this country safe and how to let others determine how the world looks like, according to the prime minister.