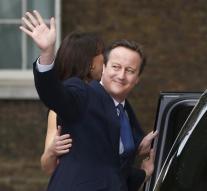 - "David Cameron, who stepped down as British prime minister after the results of the Brexit referendum in June, also stops as an MEP. He has offered his resignation Monday."

"Cameron was Member of Parliament since 2001 on behalf of Witney, a town twenty kilometers from Oxford."