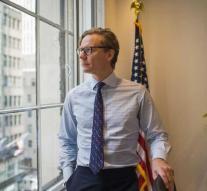 london - Data company Cambridge Analytica and parent company SCL Group close the doors after the scandal about the abuse of Facebook data. This is reported by the American newspaper The Wall Street Journal.

Earlier this year, global fuss arose when it turned out that Cambridge Analytica had put its hand on data from tens of millions of Facebook users. They had not given permission for this. The company would have used the personal information to create voter profiles.