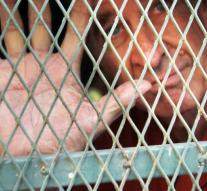 phnom penh - Cambodia leaves an Australian filmmaker convicted of espionage. A court in the capital, Phnom Penh, declared Friday that the filmmaker James Ricketson had been pardoned.

He was sentenced to six years in prison in August for having had a drone fly over a meeting of the opposition.

The judge ruled at the time that he was guilty of espionage.