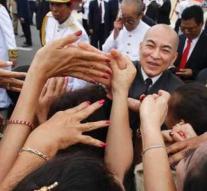 - PHNOM PENH- Cambodia severely punishes majestice, confirmed a government spokesman on Friday. Human rights organizations speak of a dangerous development where freedom of speech is at stake. Neighboring country Thailand already has strict legislation regarding statements or acts that are considered detrimental to the monarchy, with a maximum punishment of fifteen years in prison per violation.

Cambodia proposes a prison sentence of one to five years and a fine of 2500 dollars. According to the government, it is about catching up. In the constitution, insulting the king was forbidden, but in criminal law there was no comparable article and no appropriate sanction. That is now being rectified. Human rights organizations, however, think that the article will be used just like in Thailand to silence opponents of the government.

In October, a prominent member of the now-banned opposition party Funcinpec referred in a secretly recorded private conversation to King Norodom Sihamoni as a 'castrated chicken', because of his inability to act in the battle between government and opposition. That statement prompted us to review the law again.