Home / World / Calm is back in South Sudan 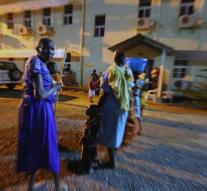 juba - In Southern Sudan and in particular its capital Juba on Tuesday was a lot quieter than the last five days. President Salva Kiir instructed his soldiers on Monday to observe a truce, and the violence subsided quickly.

Some shops and markets in Juba Tuesday morning were open and people ventured onto the streets to do some shopping. Only in the northeast of the country came reports of fighting. The violence occurs between Kiirs soldiers and those of his rival, Vice President and former rebel leader Riek Machar. Machar also asked his supporters to 'self-control'.

Since Thursday were approximately 270 deaths from fighting in Juba. Only a year ago, after a civil war two years signed peace and ruled Kiir and Machar together the country. The UN and the US pushed strongly for peace in order to avoid a new civil war.