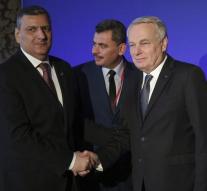 brussels - The mayor of eastern Aleppo calls Thursday in Brussels to save the European leaders on the people of the besieged Syrian city. Brita Hagi Hasan lets out at 11:00 for the building of the European Council 'a last desperate cry' for help.

French President Francois Hollande received Hasan last week. He hopes that he can speak to the leaders, he says in a statement. In it he asks to establish a corridor to the participants of the EU summit to save the lives of those who save yet.