Home / World / Call: Are you in Cambrils? 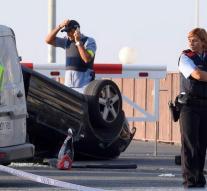 amsterdam - The Telegraph seeks witnesses of the police action in Cambrils, where terrorists enter the pedestrians and then shot dead. According to Spanish media there are Dutch eyewitnesses.

The newspaper El País has made a reconstruction based on the first investigation of justice. Dutch tourists would have witnessed the confrontation at the marina. They saw a car attacking three people.

Agents gave a stop sign, but it was ignored. In the firefight that followed, the car of the terrorists hit the head. They burst out of the wreck and continued their way with knives in their hand.

Four out of five were shot immediately. The fifth came out. During his flight, he injured a woman who is still in critical condition at the time of writing. He was found five hundred meters away by a police helicopter and shot dead.

A total of six people were injured, including three agents. They are in a hospital in Tarragona.