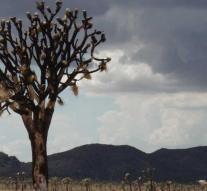 imperial - With 49.4 degrees Celsius it was one of the hottest days in California's history. On the same day, 24 July 2018, there was also a rain shower. In the town of Imperial it was 48.3 degrees Celsius when light rain fell in the afternoon.

California claims to have registered the hottest rain shower ever. And that while most of the rain had already evaporated before the ground was reached during the four-hour storm. The humidity was 11 to 15 percent that afternoon, according to American meteorologists. The rain in Imperial was partly caused by monsoon rains in the south. It is rare that it rains at temperatures of 38 degrees or higher.

The previous record was also measured in California, in the city of Needles. On 13 August 2012, rain fell at a temperature of 47.7 degrees Celsius.