Home / World / California state of emergency by hepatitis A 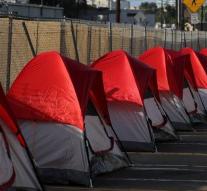 sacramento - The US state policymakers of California have declared the state of emergency by an outbreak of hepatitis A, of which about 18 people died. Homeless people are caught in camps.

The regional government has distributed 80,000 vaccines across the population, and can easily increase that number due to the state of emergency. 'To vaccinate people who may come into contact with the disease is the most effective tool for preventing their spread,' said Karen Smith, head of the Department for Public Health.

Hepatitis A is usually spread by eating infected food. In 2003, 900 people were infected in the US by eating contaminated onions in a restaurant. The outbreak in California, however, spreads from person to person, largely among the homeless people.

The disease can spread through direct contact with faeces. Therefore, large facilities with washbasins have been put into streets where homeless people are settled. The streets are also cleaned. Homeless people are caught in tents camps to prevent spread of the virus as much as possible.