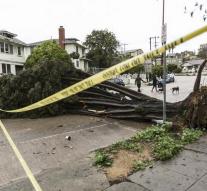 los angeles - In Southern California Saturday afternoon, began the repair of the damage that has caused the worst storm in five years in the area. The heavy rain and snowfall and strong wind gusts cost at least three lives.

The wet weather followed a long period of drought, thus ended the state from one extreme to the other. The storm caused the last few days for mudslides, flooding and power outages, but has now departed to the east toward Nevada and Arizona. For northern California expected more rain.

A 55-year-old man was electrocuted when a power cable snapped and landed on him. Victorville rescuers found a body in a car was engulfed by a flood and Saturday in Thousand Oaks found the body of a man who was swept away by the water.