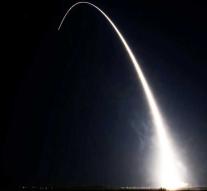 san francisco - In a press conference at the end of a climate summit, the governor of California, Jerry Brown, has announced that he wants to include a weather satellite himself to find out what sources of air pollution are. The state is working with Planet Labs to launch the satellite.

'We are going to send our own satellite into the air to find out where the pollution is coming from and how we should handle it,' said Brown. The satellite can help to prevent emissions equivalent to 200 million cars annually. When the satellite must be ready and how much it will cost, is not known.

With this position, Brown is diametrically opposed to US President Donald Trump. Trump wants to make savings on combating climate change.