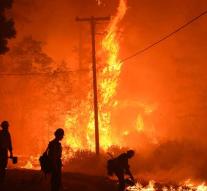 sacramento/redding - Firefighters fail to take control of a large forest fire in northern California. The fires in the Shasta-Trinity Forest have become 'aggressive violent' with flames over 90 meters high according to local media on Thursday evening. The fires block 80 kilometers of the major Interstate 5 motorway running through California from north to south.

An estimated three hundred people are evacuated in areas threatened by the sea of ​​flames. Approximately three hundred buildings are threatened by fire, half of which are dwellings, according to a spokesman from the Shasta-Trinity National Forest, about 375 kilometers north of San Francisco.

The fire broke out on Wednesday afternoon and expanded rapidly on Thursday evening. The fire now covers an area of ​​at least 90 square kilometers. According to the fire brigade, the fire is caused by people, but it does not explain that further. California is plagued this summer by a series of intense forest fires.