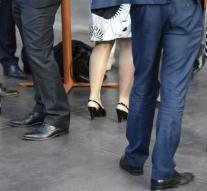 sacramento - California was the first US state to pass a law requiring listed companies to have at least one woman on the board from the end of 2019.

The law that governor Jerry Brown signed on Sunday also states that companies with five or six directors must have two or three top women in 2021 respectively.

According to Brown, on average, a quarter of the executives of large Californian listed companies- with a turnover of more than 100 billion dollars (86 billion euros)- are women. This is 11 percent for small companies. Around 165 companies currently do not have female drivers.

In the Netherlands too, quotas are regularly discussed to ensure that companies take on more women at the top.