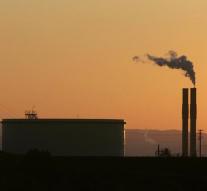 peking - The US state of California and China agreed on a climate conference in Beijing on Tuesday to establish closer cooperation in developing cleaner technologies.

The parties will also work together to reduce emissions of harmful substances and promote green trade. The announcement comes one week after US President Trump announced his country withdraws from the Paris climate agreement reached in 2015.

Jerry Brown, the governor of California, said at the conference that 'the threat of climate change will be more dangerous than that of fascism before World War II. ''