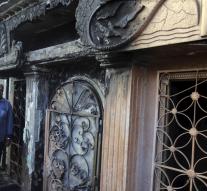 - Egyptian police have arrested two young men for the attack on a restaurant in the capital Cairo. That the Interior Ministry reported Saturday.

The men of 18 and 19 years old, have announced that they have Friday Molotov cocktails thrown at the restaurant, because there they were previously denied as a customer. After the attack the duo fled to Suez on the Red Sea. There they were arrested.