Home / World / Cabinet Republic of Congo gets up 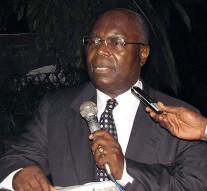 brazaville - The complete cabinet of the Republic of Congo has risen. Premier Clément Mouamba announced that on Thursday in Brazzaville.

He responded to the call by President Denis Sassou Nguesso. He said earlier this week to want a new government that could put an end to the economic crisis.

The Congolese economy has collapsed by the low oil price. Since 2014, exports have decreased significantly. The sovereign debt has risen sharply, and it is the question whether the country can continue to meet its financial obligations.