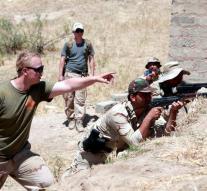 - The government will give support arm for 1 million of Kurdish fighters (Peshmerga) in northern Iraq. Minister Bert Koenders (Foreign Affairs) announced last November of weapons and ammunition to want to provide the Kurds IS for their fight against terrorist groups.

But there are no weapons in the Netherlands to Iraq. The money goes to an American aid program which include ammunition for peshmerga's purchased at the front, write Ministers Koenders, Lilianne Ploumen (Development) and Jeanine Hennis (Defense) Monday to the House.

The government supports the Kurds have been working with include equipment to detect roadside bombs, helmets and vests shard. Dutch soldiers also train the Kurdish and Iraqi forces. Dutch F-16s stopped last week against IS their mission. The fight against IS in Iraq and Syria Netherlands since 2014 cost more than 119 million euros.