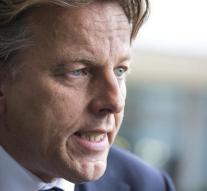 london - The government will make extra 2 million euros extra for strengthening the rule of law in Somalia. The money is specifically intended for legal assistance in the region and support of mobile courts. Minister Bert Koenders (Foreign Affairs) announced the contribution at an international conference on the country in the Horn of Africa.

During the London meeting, agreements were made with the new Somali government on, among other things, the building of military and police. Koenders pleaded for more attention to the building of the legal sector. The country has to face terrorism, piracy and famine.