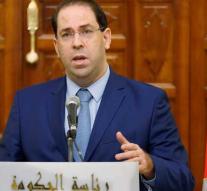 tunis - Tunisian Prime Minister Youssef Chahed appointed ten new ministers on Monday. With the government change he hopes to inject fresh blood into his government, which is widely criticized because it can not solve the economic crisis.

Important portfolios such as finance, foreign and domestic affairs remain unchanged. Chahed appointed the Jewish businessman René Trabelsi as Minister of Tourism in the Islamic Arab country. This makes him the third member of the small minority of 2000 Jews who belong to a cabinet since the independence of Tunisia in 1956.