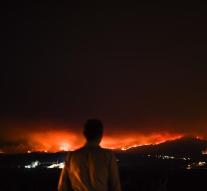 the hague - The Ministry of Foreign Affairs investigates whether there are Dutch among the victims of forest fires in Portugal. During the huge fires, 57 people died on Sunday.

'We have good contact with the Portuguese authorities and we are investigating whether there may be Dutch involved,' said a spokeswoman.

Fire brigade The Netherlands responded shockingly to the high number of victims of the fire. 'What a tragedy,' said the organization on Twitter.