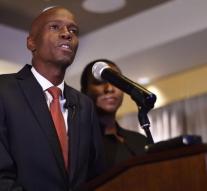 port - Businessman and banana exporter Jovenel Moise in the first round of Haiti's presidential election got the most votes. This is clear from the preliminary results announced by the electoral council.

With 55.67 percent of the total votes Moise obtains a majority which means that a second and decisive round is not necessary. Haiti will finally, after a year of political uncertainty have a new president, if the losing candidates did not contest the results.

The first round of the presidential election was a rematch of the elections held a year ago. The result was then declared invalid after numerous complaints of fraud. President Michel Martelly stepped down in February, without there being selected a successor. Haiti has since been run by interim president Jocelerme Privert.

The initial elections would actually be held October 9 but was postponed by Hurricane Matthew until 20th November. Matthew plagued early October the impoverished country. More than a thousand people have died and tens of thousands homeless. The United Nations has asked donors over 100 million euros available for the victims.