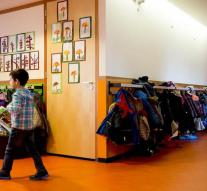 - The German child has received a record number of children and youth in 2015. The increase compared to 2014 by 62 percent was mainly due to young refugees who arrived unaccompanied in Germany.

Together were 77 600 children and young people housed. Among them were 42 300 young refugees without parents or other supervisors. That group of displaced people grew strong and was 263 percent higher than the previous year.