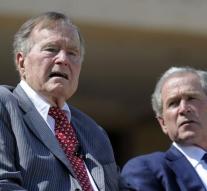 - The voice of the Republican former President George H. W. Bush (92) goes to the November elections to the Democratic candidate Hillary Clinton.

That news was brought into the world through Facebook by Kathleen Kennedy Townsend, a niece of John F. Kennedy. A photo of her and the ex-president, says \'the president says he votes for Hillary,\' was initially not visible to everyone. In interview with Politico Townsend has however confirmed the message.

Bush sr. Was silent earlier about his vote in November. From this arose the suspicion that the former president has little to with the Republican candidate Donald Trump.