Home / World / Bus deep in the sea in South Russia 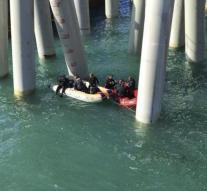 moscow - Fourteen construction workers were killed in the south of Russia when their bus collapsed. The accident happened on the Taman peninsula.