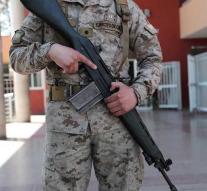 santiago de chile - In case of an accident with a bus that was dumped from a cliff in the south of Chile, at least two employees of the Chilean army were killed.

At least ten of the 31 passengers were injured and according to police reports, people are also missing. The wounded were brought to a hospital in the nearby city of Puerto Montt with helicopters.

The bus, which carried army personnel, shot off the road on a national road in the Los Lagos region and crashed forty meters into the sea, the governor of the Llanquihue province said to radio station Radio Bío Bío. The soldiers in the bus worked on the maintenance of streets and bridges. The cause of the accident is not yet known.