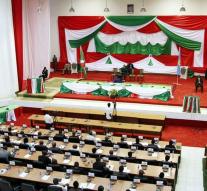 bujumbura - The African country Burundi wants from the International Criminal Court (ICC) steps. A majority of the Burundian parliament voted Wednesday to withdraw from the court in The Hague.

In the country's restless since April last year. President Pierre Nkurunziza went against the rules for the third time in presidential elections which he subsequently won. The ICC announced earlier this year for an investigation into the violence surrounding the elections, to determine whether there is an actual investigation.