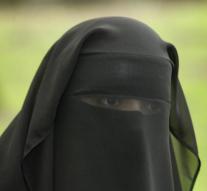 - The Islamic State has a burqa ban in IS buildings created after IS'ers recently were repeatedly targeted by female terrorists dressed in a niqab, a garment that the female body in the eye after completely covered.

The ban has been in force in or near official buildings IS, Iranian media reported. Beyond that women are still forced to cover themselves completely.

The turn is to say the least to mention weird, because the terrorist movement of women- and men- just many rules imposed under Islamic law; Shariah. IS has previously banned smoking, dancing, foreign television, Internet and satellite dishes.