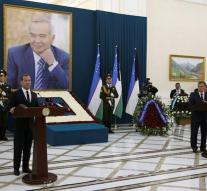 samarkand - The deceased President of Uzbekistan Islam Karimov is Saturday buried in a grave in his hometown of Samarkand. The ceremony took place in front of several thousand people, including some foreign leaders.

Among the mourners was, for example, the Russian Prime Minister Dmitry Medvedev. Karimov died at the age of 78, a few days after he had suffered a brain haemorrhage. Uzbekistan confirmed his death Friday. He ruled since 1989 with an iron fist over the country.

Sjavkat Mirzijojev, the current prime minister, is seen as a possible successor.