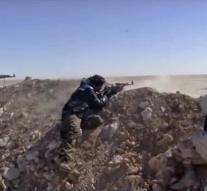 raqqa - An air attack on the northern Syrian city of Raqqa has killed at least 21 civilians, according to the Syrian Observatory for Human Rights. The attack would be the work of the US-led coalition.

The observatory also reported that troops of the Syrian Democratic Armed Forces (SDF) on Tuesday attacked the city held by Islamic State. The attack was announced earlier this month. Whether the air attack was part of it is not clear.

The victims of the air attack were, according to the observatory, people who crossed the Euphrates River in an attempt to flee the city. Some ships, among other things, were taken under fire. The observatory is based in England, but is based on local activists.