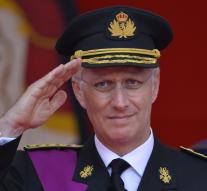 - The Belgian court has contacted Burger King about the controversial advertising campaign of the fast food chain. According to Burger King, the conversation was 'cordial and constructive', revealed the American chain to Belga.

The campaign in which the hamburger chain asks the Belgians who is king, King Filip or Burger King, did not fall well in the royal palace. Our southern neighbors can vote until 19 June, the day when Burger King opens its first branch in Belgium. Whom King Philip chooses receives the message: 'Are you sure you want to swear to King Philip? He is not the one who will bake fries. '

The Royal Palace showed that the fast food chain Filips used image without consultation. 'We had a first contact to express our dissatisfaction about this way of working,' said the Palace. Details on the content of the conversation are not released for the time being.