Home / World / ' Bundeswehr ' in action against IS 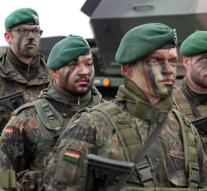 - The German government Tuesday decided to deploy up to 1200 troops in the fight against Islamic State. It is mainly about soldiers who will participate in air strikes in the Middle East.

Participation in the fighting in Syria and Iraq is a reaction of the German government to the bombings last month in Paris. The parliament, the Bundestag must still approve the plan.