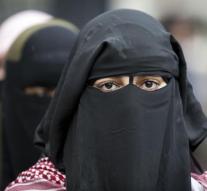 berlin - German officials, including soldiers and judges, may not wear face-covering clothes during work. To this end, the Bundesdag, the German Lower House, decided on Thursday evening. The new law still needs to be given green light from the Federal Council, the representation of the sixteen state governments.

Hiding the face from religious or ideological beliefs is in violation of the duty of neutrality that public officials have. In the new law, veiled women are now obliged to show their faces when they need to identify themselves.