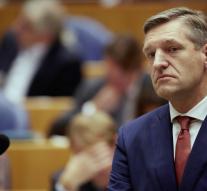 Buma showed understanding for the Hungarian Prime Minister Orban , who complains about criticism of the fence, but also blame if he gets bore refugees and then let travel to other countries.

Incidentally Buma sees hermetically sealing borders as the solution to stem the flow of refugees.