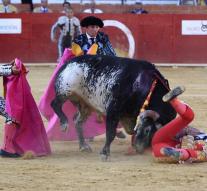 teruel - A 29-year-old Spanish bullfighter is in front of hundreds of spectators slain by a bull.

Víctor Barrio was fatally hit during a tournament in the city of Teruel in eastern Spain. He was taken unconscious to hospital, but doctors could do nothing for him.