Home / World / Bulgaria is no government 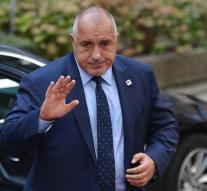 - Bulgaria needs to find a new government. The parliament in Sofia Wednesday did accept the resignation of the center-right government of Prime Minister Boyko Borissov. Who had his political fate to the presidential elections of last Sunday.

'The result of Sunday made it clear that society will change,' Borisov told parliament of the EU country. Probably the Bulgarians should early next year to the polls to elect a new parliament.