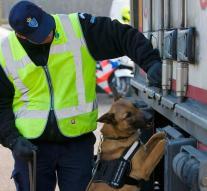 - Bulgaria is firmly tackle smuggling. That made the Bulgarian Interior Minister Rumjana Batschwarowa Wednesday. The ministry is a special center that the fight will engage in smuggling and there are sixty border guards from the European Border Service Frontex expected.

In an action in the Bulgarian capital Sofia, Tuesday and Wednesday 65 people were arrested without papers. Among them were women and children. North of Sofia were arrested 34 men who were hiding in a house. they had no papers on him.

,, The routes used for smuggling in recent days become busier, '' said the minister. After the closure of the route through the Western Balkans in March refugees now try to enter illegally into Western Europe through the further East Bulgaria.